It was te second year since the inception of the Kenya Wildlife service ( KWS ) and the elephant poaching was escalating nation wide and the service came up with a strategy of recruiting young and energetic commanders to lead the newly trained rangers in magadi. They conducted a nationwide exercise and twenty eight cadets were recruited and they reported to manyani field school early January 1992 for a platoon commanders course. The team included, Paul Kipkoech, Dickson Lesimirdana, Justus Bartenge, Peter Lekeren, Elema Halake, Abdi Doti, Jacob Nangomo, Elema Saru, Zakayo Leparie, Ruben Lenanguram, George Osuri, Michael Lenaimadu, Samuel Tokore, Kwiriga Babu, Stephen Mageto, Stephen Shani, James Ole Kipuri, Abdi Nasir, James Oundo, Francis Lesilau, John Suge, Oliver Mnyambo, Joseph Kavi, Kamau Ndacho, Jacob Orahle , Ali sugow, Osman Ibrahim, Rashid Noor better known as Cobra and me. Most of us were working in government ministries, some teachers , one was a priest who could not stand the seminary, students who just came out of secondary school and a few others who were working in the service at the time. A complete combination that represented the whole country and we endured the hardships and the cruelty of the trainers, mostly a man called Abdi who taught us parade drills but the greatest humiliation came from our own NCOs who could not understand why we and not them were taking the course. 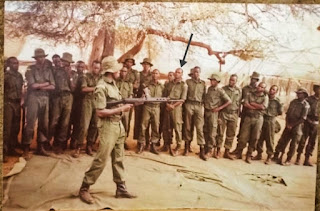 The cadets on a skills at arm lesson. Zakayo leparie  alias “ crocko”is demonstrating during a skill at arms lesson and the arrow is pointed to the blog author.

Manyani field training school was the old APU camp and the facility was run down completely so the service was in the process of renovating it into an institution capable of training rangers on field craft and other related operations .  For some of us the facility resembled a ghost camp with little human presence due to the bush thickness. I was among the first to arrive and were met by a person who advised us to wait for the rest at the manyani prison place and we found course instructors there who led us to a small pub called  “ pumzika “ where we waited for our transport and they gave us insight of the course  and we were in very high spirits by the time we drove into the gate, but there was a reception party waiting for us at the entrance and my day was ruined. It is important to note here that i worked with the ministry of agriculture for six years as a livestock production assistant after graduating from AHITI [ animal health and industry training institute] Kabete and i had also taken the courses on AI [ artificial insemination ] and on meat inspection , and i was assisting the meat inspector at the maralal  slaughter house prior to reporting to manyani. So i had the characteristics  of a typical civil servant , and i had generated a small beer belly due to the free liver we received every day In relation to the spoils of the trade.


The reception party in manyani refused to listen to my plea and we were directed to climb a stone hill steep enough to be manmade in the assertion that we were to collect our admission letters up there. I tried to remove my coat but one man called Francis Kurgat insisted that i climb the hill with everything that i came with but i refused to carry my suitcase and I scrambled up to catchup with the others. We did not find the admission letters so we struggled to climb down the other side of the hill and when we reached our starting point we were panting and grasping for air but they forced us to jog and i fainted , and they forgot me for a while. What a reception. We were then made to carry our baggage and in a run we trotted to a makeshift store where we were given a mattress, a pillow and a blanket. Some rangers who were on a promotional course were called in to help us erect tents and I personally  remember one who was called shebow who demonstrated to us how to clear the ground using bare hands. I remember this man well because a few years later he disappeared with no trace to date with field  allowance for the special operations base (SOB).

Manyani had a strange collection of instructors and I remember an old man with a foul mouth who smoked a lot and i still don’t remember what his exact duties were but he was fond of drawing landscapes. He was called Kanyi, then there was sergeant Maina who made us to believe that every head of a goat slaughtered there belonged to him,  sergeant Mailu of the “ nyakaa “ fame, there was Cpl Kemei who called us officer kurutu, Cpl Kimani Mweiga [comrade] Cpl Jeremiah  Kurgat, Cpl Francis Kurgat, Cpl Ayienda, the cook called pulei, Heri the footballer [mjomba] and Lewis chege to name but a few. Our course officer was the big GSU man called Marcus Ochola who is currently the Rift Valley Regional Police Commander. We had three commandants during our seven month long course and this included Mr. Mbuthia who died in a car accident along the Mombasa/Nairobi highway near sultan Hamud, Mr Thomas Mailu and Mr. Fredrick  Kiminda. We spend the first three weeks trying to get fit by running every morning , and being at the drill square with corporal Abdi the whole day. The first two weeks were really hard on me that I contemplated desertion and I actually called the livestock office in maralal to inquire if my resignation letter could be withdrawn but I resigned to my fate when I learned that the letter was long sent to Nakuru. I later learned that I was not the only one contemplating the same but junior colleagues who were taking the ranger to corporal course at the school gave us A lot of encouragement With promises of a brighter future.

Corporal Abdi was a brute who got pleasure in other people’s pain and we really suffered at the drill square while he took us through the motions and the squads as he broke the drill into three steps. The whole team would be punished when a member spoiled a step and I tell you very many of the members had never learned of the Boy Scout movement and marching was an act from outer space. Some were swinging both hands forward and I would lie if I described how they moved their feet because in most cases they swing forward the right arm together with the right leg. All this translated to a specific punishment as prescribed by Abdi and climbing the hill behind the office became a norm. We cherished lunch brake not because of the food but it gave us some relief from the monster and from the scourge. I dreaded going to the pit latrines because of the pain in my  thighs when trying to stand after the act, and this I later understand must have been why a platoon of masai rangers Who were referred as “ lot 60 “ brought in for training refused to enter the joints and they did their thing in the surrounding bushes.

We got into the rhythm of training after the first month and we impressed everybody including ourselves to say the least after more lessons were introduced such as field craft, skill at arms and leadership. Only one person left the training and the rest of us bonded with one another , first to evade Abdi but i should also confess that we just felt like we had a responsibility to excel and silence some section of instructors who had a notion that most of us would not complete the training. Skills at arms was a different sensation all together and we worked so hard in preparation for the standard classification exercise which sifted the bold shooters and the first timers. We completed our syllabus in the fifth month and we were taken for the March and shoot exercise that combined all field exercises including close quarter battle night navigation and ambushes , which could only be done in the thickets of Oldonyo nyiekie in magadi. We navigated out of the hills and valleys at night using compasses and maps with stars as strategic beacons, and we overworked our instructors on the magadi plateau during field craft where we would reorganize ( reorg on me ) three kilometers from the charge-through site. That was our best way to give back to the instructors. On our las night in magadi a stand to procedure was sounded at night by our instructors to check on our level of alertness and we all dashed into our kips except Jacob Orahle who was found outside the kip and he was pronounced dead as per the rules but he refused to accept and he kept on claiming that he was still alive. We excelled in magadi and our course officer said as much , before we trooped back to Manyani believing in ourselves and knowing that we would contribute immensely in protecting and conserving our heritage. 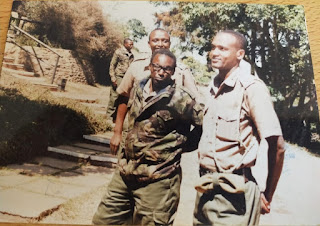 The Rtd senior warden Mr.Geofrey Lolkinyie who was the  admin officer then with Dickson in the background and the author in one of our progressive security meetings.

We never sat in conventional class room for the entire duration of our course in manyani and there were no chairs and we took our lessons under an acacia tree which had very broad branches and lots of shade. We had to sweep the class every morning and pour water to reduce dust. We made do with stones as chairs and we wrote on our laps and most of us had holes in our trousers due to the hard surface of the stone seats. The chalk board was tied to the stem of a tree and in windy conditions two students would volunteer to hold it while the instructor wrote on it. We ate our lunch and dinner under a shade less tree near the make shift kitchen and we had benches made of poles as seats. We were made to believe that this was not a punishment, but part of our training.

We all went through an interview held by a board Which was led by the Deputy director security [ DDS ] but we were kept in training for another two months in Manyani due to some administrative issues where the DDS was strategizing and forming more companies to accommodate us and when we finally graduated we went to our duties as posted and I was sent to Mt. Elgon (C coy ) . I didn’t understand why the instructors were feeling sorry for me after the posting and I got concerned and I had to inquire the reasons but I was only told that Mt. Elgon is a very hard place to work but I proceeded to my new station without any reservations and I led my men in to our assignments with the pride of a leader due to the training and hard work that I under went in Manyani.

Posted by Ranger Memories at 07:02